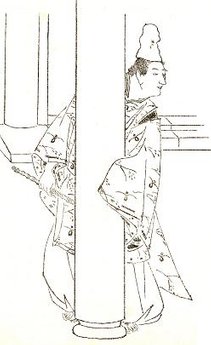 Om at lytte til gagaku

"The complex timbres of the three basic wind instruments represent the concept of heaven, earth and the space between.

. . . . The shape of the sho is thought to resemble a phoenix at rest with its wings upright. The harmonies of the sho are considered dissonant by the standards of traditional western music, but such sounds are considered very beautiful in gagaku. It is said that the people of ancient times believed that the sound of the sho expresses a ray of heavenly light. The hichikiri . . . is said to express the voice of those who live on the earth: in other words, humans. The ryuteki, a term written with the characters for "dragon flute", represents the sound of the creature for which it is named, a dragon that flies in the space between heaven and earth. When these three instruments are played together, heaven, earth and that which lies between become one and represent a universe.

If you think of it this way and listen very carefully, you may feel that the harmonies of the sho do indeed call to mind a celestial light; the subtly tremulous sound of the hichiriki may well sound like a human voice. . . .

I tell people today that to understand gagaku, you must not simply listen to it with your ears, nor think about it with your mind. Instead immerse yourself in the air in which gagaku music flows. Close your eyes, relax and feel the calm stream that envelops you. Music is not necessarily perceived with the ears alone. Gagaku, in particular, is adequately understood only if it is felt by the entire body. The combination of sound enters the listener through the mouth, the nose and the pores of the skin, stimulating the very cells of the body. If we allow for the possibility that the musical and artistic sensibilities of the ancients have been transmitted to us modern people genetically, might we not also yearn for those sounds with our whole physical being? Perhaps we have forgotten gagaku with our minds, but our bodies continue to remember it. I firmly believe that this physical memory allows us to appreciate gagaku better." (Togi: 31-32)