"...Jayènraga, with an elegang genture,
took up the rabab.
It was well-shaped.
The neck was pontang (elfenben og bøffelhorn)
the bow was ornamented with carving and gilded
the sound-box provided with an embroidered covering.

The nem-string (nem er 6. tone) was plucked
when bowed, its tone was evidently
quite in accordance with the nem of both gender and gambang.
The nem of the suling, too, harmonized.
Jayèngraga settled himself
his attitude was humble, as was his nature

He bowed a few times up and down, to test the instrument.
The bridge was cut from teakwood
the tension of the skin was firm
in short, everything was perfectly well-finished.
He then intoned patet sanga (en modus).
His fingers vibrated, touching the strings now and then,

like the scorpion getting ready its sting.
Pressing down the string was done accurately
the tips of the fingers pressed the resilient string down,
searching for a wilet and a cengkok (forsiringer), in rapid tone-figures.
The sliding to and fro of the hand caused the string to bend through.
Every now and then the exact pitch of the tone was deviated from, so as to heighten the charm.

The middle finger was conspicious in its movements
the index was like the sprig of a young fern
the little and ring-finger looked very much like spider's feet.
The fingers were placed skilfully on the strings, each in its turn.
The bow was used in quite a natural manner, from the nut to the point
whenever the tempo accelerated, the bowing adjusted itself to this without hesitation.

Ngechec, ngekik, ngelik and ngungkung (de forskellige registre) were done in accordance with gender, gambang and suling.
The enchantment was perfect.
Garlands of tones twirled round the (hearer's) heart.
The play of the strings harmonized with the tones of the nuclear melody
it was distinct, regular and suitable.

On close examination of Jayèngarga's rebab playing one had to acknowledge
that it was full of devotion, well finished and clever.
Sometimes he slightly moved his thighs:
that was a habit of his and is, after all, not annoying.
It was not this time as on previous occasions
the playing this day excelled everything.

The other players were i ecstasy (opr. had no heart left)
not a single niyaga had any remark to make
they all sat dumbfounded while watching Jayèngraga
they simply sat perplexed, looking at him in dumb admiration

The sendom was finished
sarayuda followed immidiately after and was wound up with a drumbeat bem and a beat on the gong that gave one a feeling of satisfaction.
After the patetan, Jayèngraga gave a critical look at the rebab. 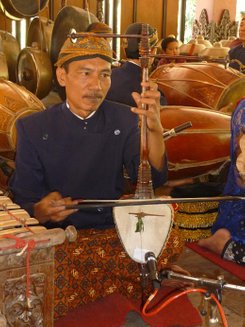